I'm madly in love with this woman's style. And I totally agree with some of her quotes: Oh, well... It seems like the idea of putting black people on the cover has dominated some editors' minds. We already had LeBron in US Vogue and the "all black issue" of Vogue Italia recently. OK, I get the idea. The readers are not all white blond blue-eyed girls, so I guess there should some variety also on the covers. If so, what about Asians, Latinos and all those biracial models? Think about the most popular Brazilian girls: Raquel Zimmerman, Caroline Trentini, Gisele Bundchen... They're all blonds of European descent, but coming from multiracial society. And how many Asians do we have on the runways? Just a couple of them: Hye Park, Du Juan, Ai Tominaga, maybe a few more.

So why am I writing all of this stuff? Because it seems to me that Carine Roitfeld organized a little competition - which cover is going to sell better - the one with Noemie Lenoir or the one with Laetitia Casta? They're almost the same age, both French, both actresses and models, wearing the same Chanel dress, standing in the same pose, having the same make-up. The only difference (except the hairstyle) is the skin color, of course. Pictures taken by Mario Testino. The next thing - "Ca, c'est Paris" editorial. I'm honestly so disappointed. The pictures were taken by Peter Lindbergh and I was hoping he'll do a better job. Maybe it's because I'm tired of all this "strong woman" and "women love women" image. Or maybe because the snap from the bottom reminds me too much of that and comparing Sasha, Natasha, Lily, Doutzen and Catherine to Naomi, Linda, Tatjana, Cindy and Christy is just ridiculous (how would you call them - post-supermodels?). Or maybe because the editorial is just bad. Or maybe because I don't like the entire issue. Too bad.

I absolutely love Devi Kroell's clutches. She makes wood such a fresh material and the combination of rich brown/black and multi-color crystal embellishments is just a perfection. Devi describes her style as "simple shapes in luxurious materials" and it's so true. I don't mind her other pieces such as leather bags or shoes, but I'm always anxious to see her new clutches. The pictures come from Devi's official website - it's a preview of the spring/summer collection.

Yesterday H&M published some pictures of their fall/winter collection. And it looks so refreshing, don't you think? I love the knitwear and the coats, and some of the skirts are just awesome. Unfortunately, the H&M clothes never look nearly as good as they do in the pictures. Besides some of the pieces are so much like designers' collections (for example this "Prada inspired" set). Model: Heather Marks (glad not to see Anja again).
o 4:38 PM 1 comment:

I really don't like the sixth Kate Moss' collection for TopShop. It seems to me, that Kate this time tried to be even more original than usual. So she combined so many various styles and it's impossible to get the main idea of the collection. Therefore you can imagine how surprised I was to see all those positive reviews at the FashionSpot.
The collection was launched today in the morning, but the clothes are already mostly sold out. Obviously, you can find them at Ebay.

But what's interesting about the collection is that for the first time it's also available in bigger sizes.
o 6:49 PM 1 comment:

Sorry for the break. I've got a few e-mails asking me what might have happened to me. There's only one answer - the springtime. Sorry once more.

OK, so I'm late to write about the recent resort collections - probably everything was already said about that and nothing new would I add to the issue. As in the last couple of weeks I'm sort of forced to gain knowledge about Bollywood, I decided to take a closer look at Vogue India, which was launched in October 2007. Here's the first cover, as we all remember, with Gemma Ward, two Indian models: Monikangana Dutta and Lakshmi Menon and three Bollywood superstars: Bipasha Basu, Priyanka Chopra and Preity Zinta. Both the issue and the cover became controversial. The issue - because it was thought that it is not "vogue" enough and too "Indian" (which sounds kind of weird knowing that it's an Indian magazine, but I get the point). The cover - because it looks too much like the premier Vogue China cover and besides it's just... bad. Judging from what girls at Fashionspot say and from some scans of eds you can find at Flickr, Vogue India is getting better and better with every issue (but not with its the covers - unfortunately). And it stays so Indian - contrary to for example Vogue Nippon that is not as Japanese as we could expect. Too much of Bollywood in a fashion magazine, don't you think? Furthermore, in May there was a men's edition launched - Vogue India Man. And on the cover - the famous Krrish guy with 11 fingers. Sounds like a perfect choice - according to Polish wikipedia Hrithik is as popular among men (he started out in India the trend of one-day beard) as he is among women (30 000 Valentine's cards in February 2000 only). But I hope to see somebody outside Bollywood on the June cover. And here are some snaps from random eds: Today's item are VLINGs - pieces of jewelry made out of vinyl music records. They come in various shapes and colors, you can order yourself also a custom piece. The jewelry looks really cute, but I wonder, how long would it last for. The earings and necklaces coming in black are for $15, the colored ones for $18.
o 12:59 AM 7 comments: I must admit, there are no stunning covers this month. I didn't like the i-D ones with Aggy, nor the anniversary covers of Spanish Vogue and Brazilian Elle. So here's what I chose:
Source: Fashion Spot
o 4:50 PM 1 comment:

Cover of the moment 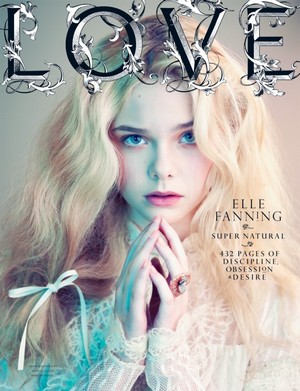 Ad of the moment 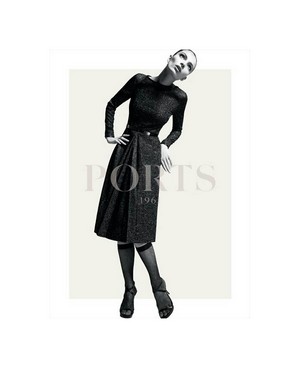 Ed of the moment 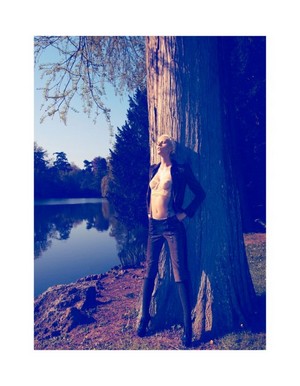